S
Steve Paro
started a topic over 5 years ago

In the May 2017 Release, we introduced Carryout Notifications and with it, the ability for customers to notify the store of their arrival via SMS text messaging. While this feature is valuable in its own right, there are a few details to the current implementation that do present limits to it widespread adoption and usefulness. That all changes however, with the August 2017 release.

Previously for the customer’s HERE message to trigger and broadcast the Arrival notification message to the store, the message would have had to originated from the mobile phone number that was directly associated with the order, and had to have previously participated in a messaging exchange, or received a Carryout Notification message from ShopperKit. Unsolicited text messages from unknown phone numbers would not resolve and the message would go nowhere. Now when ShopperKit receives a keyword (HERE or OMW) text message from a number that it does not recognize as belonging to an active order, it will automatically send a response back to the customer to ask for the mobile number associated to the order so that it may complete the lookup and trigger the arrival notification to the stores. All of this means that you will now be able to offer the use of this service to customers independent of the Carryout Notification feature.

In addition to this ability to interact with the customer to lookup the correct order number, we have also added the ability to configure an additional Parking Spot prompt. With this prompt enabled, ShopperKit will text the customer to ask for their parking spot information. When the customer responds to this text, the parking spot information is saved and displayed to the Store Associate as an added attribute on the Carryout Order Summary screen. Regardless of whether the Parking Spot prompt is enabled, ShopperKit will now also send a final confirmation message to the customer so they know that the message was received. 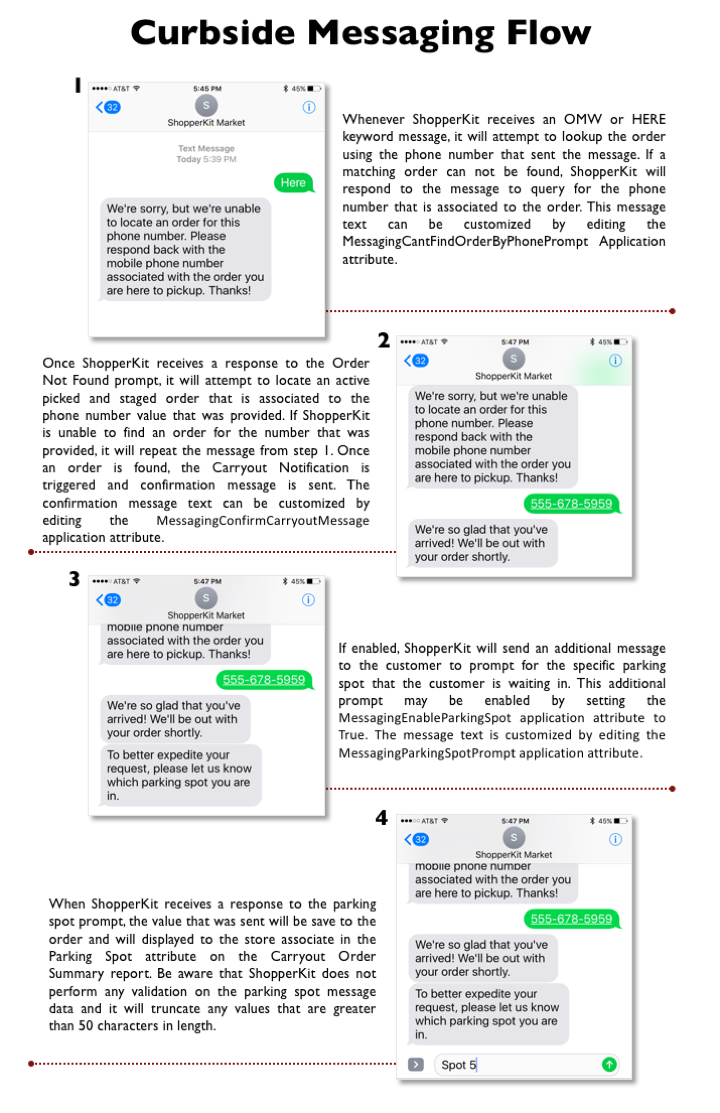 One of the unique features of ShopperKit is that it allows multiple store associates to shop the same orders at the same time. This is particularly useful when employing a zoned picking strategy, where multiple associates will work the same orders, but each will be responsible for only a portion of the order based on the departments or aisles that order falls in. The current implementation of this feature relies on a brute force, time based refresh that may result in an excessive delay before updates made by other associates are reflected in the UI. As the refresh in this approach is based entirely on time, it has proven to be more taxing than we would like as it forces the client application to reload the entire shopping session, regardless of whether any of the underlying data has changed.

With the August 2017 release, this feature has been optimized. Now, the ShopperKit client has the smarts to only refresh the UI when it knows that a change has been made to a shared order by a different user. As this new strategy is event based, relevant updates will be reflected in the UI much faster and more efficiently. Please note that ShopperKit does not expect that the same user will be shopping the same order, at the same time on multiple tablets. When looking for devices to notify about relevant order updates, ShopperKit will ignore the device session belonging to the user who made the triggering update as it assumes that the UI in that device session was correctly updated at the time the transaction occurred.